QoS or Quality of Service makes it possible to provide different priority (bandwidth) to different applications, rules and subscribers. With this functionality you can easily control the bandwidth of all subscribers in your network.

QoS comes standard with some limitations, to have full access you have to buy the QoS module. Limitations in the standard version are:

There are 3 types of nodes (the rectangles):

There are a few properties that you can configure when you create a new node.

Can be applied on:

We are going to use an example to make it more understandable. We will configure a QoS setup for users in 1st, 2nd and 3th class. We wil also apply some network policies on them. We need to make the 1ste node editable. You need to click on the edit icon in it and then you can enable it.

Now we are going to add 3 groups: first_class, second_class and third_class. The first class will be able to use the full bandwidth. The second will be limited till 8000 kbps and the third till 5000 kbps. To add them you need to click on the plus symbol and fill in the following things: 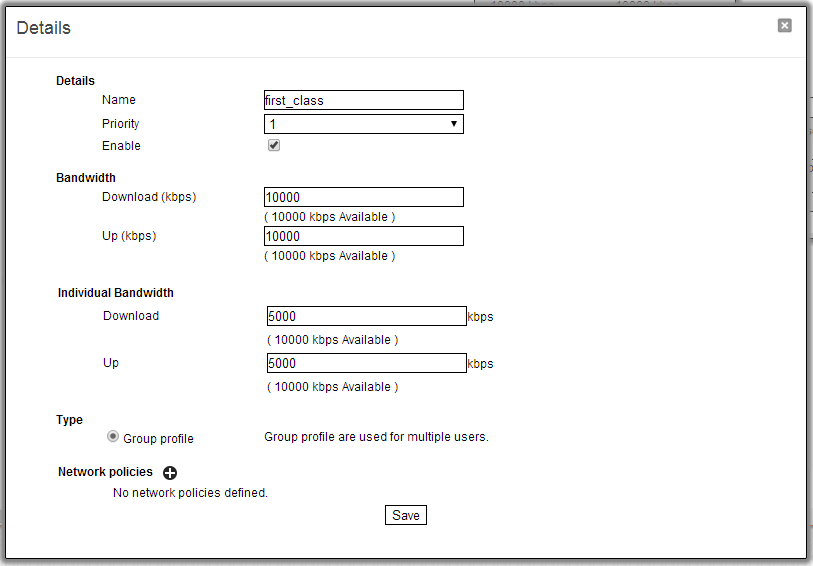 The first class users need to be able to brows the internet at an acceptable speed. But we don't want that they use all the available bandwidth for playing world of warcraft so we are going to limit that specific bandwidth. We need to add two more nodes to accomplish that. The first one will be internet and the second will be wow. To do this you need to do the following steps:

Do the same thing for wow but choose a lower priority and lower bandwidth. Now you will have something like this.

And now are we going to apply some network policies as last and final step.

Click on apply configuration at the top of the page.

Except where otherwise noted, content on this wiki is licensed under the following license: CC Attribution-Share Alike 3.0 Unported